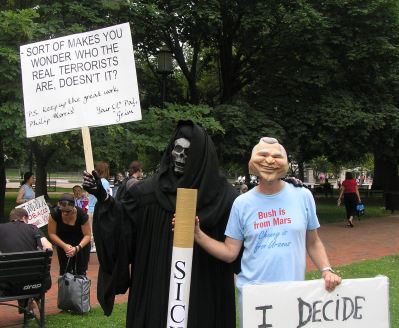 Photo by Debbie Fischer
Okay, it wasn't the real George W. but... During our march to the White House yesterday, Grim ran into an individual who was wearing an incredibly realistic- looking George W. Bush mask. As you can imagine, Grim was absolutely delighted to see his old friend! With media and other cameras snapping and rolling, Grim ran to George, shook hands (simultaneously transferring to George a small token of the nicotine cartel's appreciation) and "warmly" embraced him. Not that there wasn't enough heat already! Temperatures are in the low to mid 90s, with extremely high humidity. Add a black (and very heavy) costume to the mix and I think Grim has developed a new weight-loss program: about five pounds per hour!!! Beat that, Jenny!

Anyway, the meeting was very productive. Grim heartily thanked tobacco-friendly George for all of his wonderful work on behalf of the cartel. It was funny, we got so caught up in the moment that we didn't notice the 200 or so yelling, screaming and placard-waving (mostly youth) protestors who were demanding that George ratify something called the FCTC. What's that stand for anyway? Grim has his own ideas, but he'll keep them to himself for now.

Speaking of placards, George expressed his appreciation of Grim's 5-foot long "SICKARET"... and a placard that said, "TOBACCO KILLS MORE PEOPLE WORLDWIDE EVERY 6 HOURS THAN WERE KILLED IN ALL OF THE 9/11 ATTACKS!" on one side and "--SORT OF MAKES YOU WONDER WHO THE REAL TERRORISTS ARE, DOESN'T IT? P.S. Keep up the great work, Philip Morris! Your ol' pal, 'Grim'" on the other.

White House security and DC police just couldn't get enough pictures of "the happy couple" either! George and I offered to autograph the pictures but, for whatever reason, they didn't seem to be interested. I'm still trying to figure that one out. They took a few pictures of Grim alone too. Grim offered to pose for pictures with them, but again, they didn't seem to be interested... so instead, Grim just asked them to make sure George got a copy of the pictures.

Many more awesome stories to tell (including running into several of my Malaysian friends, one of whom featured a picture of me (at ETM 2005) in their display. And the GYAT (Global Youth Advocacy Training) session was incredible. Very inspirational!