Today -- February 11, 2020 -- marks the one month 'anniversary' of the first Coronavirus death.  It's also the day that 1) Coronavirus was renamed COVID-19 (there's something about renaming things that makes me think of Big Tobacco/Big Nicotine) and  2) the COVID-19 death toll finally surpassed 1,000...1018, to be precise.

COVID-19 has killed an average of 33 people per day, since that first death. The World Health Organization response:  Calling it a "crisis", an "epidemic" and a "pandemic", the WHO has declared COVID-19 a "Global Health Emergency", aka, a "Public Heath Emergency of International Concern". Some experts say that COVID-19 has peaked... and that, while there will continue to be many deaths, those numbers may well be in decline now.

Over that same period of time (1 month), tobacco/nicotine has killed 620,000 people globally...or 20,000 per day.  Roughly 7% or 8% of those tolls (46,500 and 1,500, respectively) are innocent/non-smoking bystanders, killed by second-hand smoke.  Nobody (except many within the anti-tobacco/anti-nicotine movement) calls tobacco/nicotine a crisis, epidemic or pandemic.  The WHO response (as well as that of most national governments of the world, especially the CRA and the IRS... and including Health Canada and the FDA et al, provincial/state ministries/departments of health, lung associations, cancer societies, heart and stroke foundations, medical associations, et al):  Maintain the $tatu$ quo... and bu$ine$$ a$ u$ual, at all co$t$! And those horrific tobacco/nicotine death numbers continue to rise -- perhaps most tragically, in developing nations...especially those in Africa -- with no end in sight!

A letter to Hon. Patty Hajdu, Federal Minister of Health:

I'd like to provide a couple of useful quotes.  The first (item 7, of 22) is from the Mandate Letter that the Prime Minister recently issued to you:  "In cooperation with other orders of government and key stakeholders1, address the rapid rise in youth vaping. This should start with regulations to reduce the promotion and appeal of vaping products to young people and public education to create awareness of health risks. You are encouraged to explore additional measures." (emphasis added)  The second one is a quote from you, from a Dec 19, 2019 Financial Post article, entitled, "Canadian health minister proposes bans on vaping product advertising": “We are working with experts and all Canadians to find ways to prevent youth from vaping. The new measures announced today will help, but there is more to do.” (again, emphasis added)  I'm neither a doctor nor a scientist (nor do I belong to any of the "mainstream" anti-tobacco organizations such as the Canadian Cancer Society, the Lung Association, the Heart & Stroke Foundation, etc.) but, given my 4 decades plus of activism in this field, globally, I do consider myself an expert.

If we're truly serious about "Protecting youth from industry manipulation and preventing them from tobacco and nicotine use" (the theme of WNTD 2020), Big Tobacco/Big Nicotine must be phased out.  No more baby steps... it's time to bring out the sledge hammers!

Read more: A call for action on e-cigs, filters, and minimum age

First, a little bit of history:

Big Tobacco (BT) exists, in Canada, because Health Canada (HC) was asleep at the switch more than half a century ago, when BT was, relatively speaking, "Little Tobacco".

Big Nicotine (BN, the latest creation of BT) exists, in Canada, because Health Canada was -- and still is -- unconscious!

It seems HC learned absolutely nothing from the [ongoing] tobacco pandemic.  Given that experience (and 2 million plus Canadian deaths from tobacco use), one would think that, if/when BT et al came up with a 'new and improved' product like e-cigs -- complete with extremely slick, glossy and ,i>attractive-to-youth marketing and advertising -- HC would've said, "Not so fast!  Like any other product on the market, this needs to be tested, we need to know the long-term consequences, etc."  But it seems that BT, with its extremely deep pocket$, always gets a pass... and, quite literally, gets away with [albeit slow] murder.

E-cigs are currently banned, entirely, in about 40 countries around the world!  What is HC doing?  Well, HC is, quite literally, "rearranging the deck chairs as the Titanic sinks."  HC is expressing "concern"... and, no doubt, establishing a few dozen committees to "study" the problem.  The results of those studies won't be known until after e-cig companies have proliferated and become so entrenched as an industry that it's virtually impossible to do anything about it, not to mention an ever-increasing incidence of addiction, disease, disability and premature death.

Read more: Health Canada needs to show some guts in the fight against Big Tobacco/Big Nicotine!

RE: The role of the tobacco industry in the 2030 Agenda for Sustainable Development

We are writing to you regarding a note on the role of the tobacco industry in the United Nation’s (UN) 2030 Agenda you received from the outgoing Director-General of the United Nations Office at Geneva (UNOG), Michael Møller.

Mr. Møller’s call for a “more nuanced” relationship between the tobacco industry and the UN system represents a threat to progress towards the Sustainable Development Goals but also stands in direct conflict with international law, in particular Article 5.3 of the World Health Organisation Framework Convention on Tobacco Control (FCTC), which states that “Parties shall act to protect these policies from commercial and other vested interests of the tobacco industry.” It is alarming that an outgoing UN official of Mr. Møller’s status would feel the need to suggest softening the stance of the global community toward an industry whose products claim 8 million lives and cost between one and two percent of global GDP annually.

Read more: Joint Letter RE: The role of the tobacco industry in the 2030 Agenda for Sustainable Development

A letter to the editor published in the Toronto Star on July 7, 2019.

Most of us are aware that cigarette butts are the by far and away the leading source of litter, either by number or weight, both in Canada and worldwide, where trillions are littered daily. In addition to being unsightly, non-biodegradable and toxic to marine and terrestrial environments, they are also a leading cause of destructive fires. Although they are increasingly getting the attention that they deserve as an environmental concern, little thought to them has been given in the context of Canada's recently proposed single-use plastics ban.

So what exactly is a cigarette butt? Doesn't the filter make smoking safer? They are made up of mostly cellulose acetate–a type of plastic. According to Historian Allen Brandt's "The Cigarette Century" , while initially introduced in the 1950s in response to growing health concerns about smoking (at a time when the industry was still claiming there were none), it soon became clear that they do not make smoking any less dangerous, (and make actually contribute to it's mortality via making smoking less irritating, easing initiation and increasing amounts smoked). They quickly became a marketing tool for the industry- pH was intentionally manipulated to ensure the filters darkened upon smoking, providing the reassuring illusion of filtration.
Read more: The Cigarette Butt: King of the Single-Use Plastics

The timing couldn't be more impeccable.

Less than 12 hours before Airspace President Errol Povah and Director Marc Ander embark on a protest regarding the ongoing sale of tobacco from pharmacies in B.C. -- the only province/territory in Canada that still allows such sales -- we learned that yet another major jurisdiction, New York state, is on the verge of outlawing the sale of tobacco from pharmacies (Albany, the state capital, and New York City have already done so).  Tobacco sales could be phased out at New York pharmacies

We'll be outside the London Drugs store at Granville and Georgia in downtown Vancouver, B.C, on Wednesday, February 27.  The occasion:  Pink Shirt (anti-bullying) Day...to the best of my knowledge, a 'local' (B.C. only) event.

So, what's the connection between an anti-bullying event and getting tobacco out of pharmacies?  So glad you asked.

Well because, a few years ago, London Drugs' COO Clint Mahlman threatened to sue the College of Pharmacists of B.C. -- as well as the individual members of the Board of Directors -- if that body went ahead with a plan to outlaw the sale of tobacco products from all pharmacies in B.C.  Tragically, their threat -- THEIR BULLYING -- worked...and the College backed down.

We, however, will not.  We will embarrass and humiliate London Drugs -- as well as their #1 cheerleaders (Jon McComb and all the gang at CKNW/Global) -- as much as possible.

28th January 2019
To the Director General and Executive Board of the World Health Organization:

We write to you, as members of the global public health community, to express our grave concern at the attempt by the Philip Morris International-funded entity, Foundation fo a Smoke Free World (FSFW), to pave the road for partnership with the World Health Organization (WHO).

Giving any consideration to an organization that is entirely funded by the tobacco industry would fundamentally undermine the significant health and policy gains made to date on the attainment of the Sustainable Development Goals (SDGs) and prevention of noncommunicable diseases (NCDs) through the implementation of the WHO Framework Convention on Tobacco Control (FCTC). It would specifically undermine WHO FCTC Article 5.3 which seeks to protect public health policies from the vested interests of the tobacco industry and on which much of the success of the treaty rests.

We therefore call on you to reject this approach, in the strongest terms, and reinforce WHO’s 2017 notice to governments and the public health community to reject any affiliation with FSFW because of the “of clear conflicts of interest involved with a tobacco company funding a purported health foundation, particularly if it promotes sale of tobacco and other products found in that company’s brand portfolio.”

A letter to the editor published in the National Post on June 30, written by Stan Shatenstein of Montreal:

Imperial Tobacco says it's “shocked and confused” by the government's proposed regulations mandating plain packaging for cigarettes and other tobacco products. What's truly shocking is that a company responsible for fully half this country's annual 45,000 entirely preventable, premature smoking-related deaths has the gall to continue complaining and to even threaten to take the government to court.

Imperial should just quietly keep counting its blood-soaked money and also count itself fortunate that its products are so addictive that they can't be banned outright. Prohibition is not realistic, even if tobacco's toxicity would make it entirely warranted, but any regulations the government wishes to impose, and are based on the best available evidence, are worth adoption without Big Tobacco's input.

It's also worth noting that, while Imperial laments "a number of provisions that are basically impossible to comply with,” the industry said the exact same thing when Canada was on the verge of setting a world precedent by introducing graphic warning labels in 2001. Health groups quickly found printers who could do the job, putting the lie to the firms' complaints. Canada is not the first when it comes to plain packs, but the draft regulations are rigorous and set a number of global precedents. They should be saluted, not challenged by the industry whose unconscionable actions have made them necessary.

A ticket for $575 issued by the RCMP in Langford, west of Victoria. 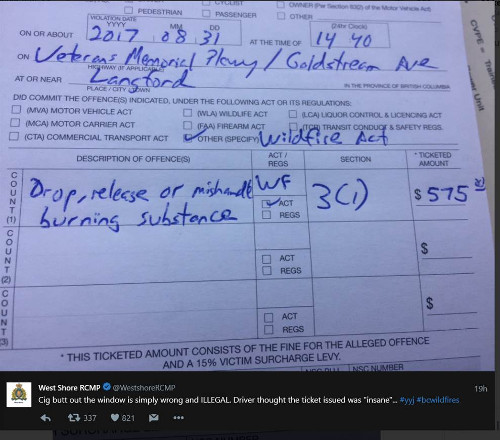