Airspace President Errol Povah and Philip Morris International CEO Lou Camilleri made a trip to Victoria on November 10 to participate in Occupy Victoria and draw attention to the British Columbia Investment  Management Corporation's continued investment in the tobacco industry. They walked from the Occupation at Centennial Park to the BCIMC offices. A transcript of Camilleri's speech appears below the fold.

It's a pleasure to be here in Victoria to celebrate Remembrance Day. I remember that Victoria was the first city in North America to ban smoking in all indoor workplaces, including pubs and restaurants, but you know, it's doesn't matter, because the only thing that matters to me is money.

Before I go any further, I want to explain exactly who Philip Morris International is. Our corporate headquarters are in either Lausanne, Switzerland or New York, depending on which side of the bed I get out of in the morning. We own Rothmans Benson and Hedges in Canada, so if you smoke one of those brands, or Craven A, it's good for me, but it's good for British Columbia public employees, too. I'll explain that later.

If you smoke Marlboros, that's actually Altria, not Philip Morris. They changed the name for the US operation. They used to own Kraft, so if you wnat to know what's actually in those Kraft macaroni and cheese dinners, don't ask me; ask Altria's CEO, Michael Szymanczyk. He only makes $20 million a year, which is a lot less than what I get.

If you smoke Players or Matinee, they're owned by British American Tobacco, based in London. They have stuff in their annual report about corporate ethics and responsibility, so don't confuse me with them. If I want to use child labour in the Third World or slave labour in North Carolina – they're Third World too, but nobody's told them yet - I'll do it, and British Columbia public employees will reap the rewards.

The way it works is, there's this company over there called British Columbia Investment Management Corporation, or BCIMC. They invest public sector pension funds, as well as the Worksafe BC Accident Fund, into things that make money. My company, Philip Morris International, makes lots of money, so BCIMC currently holds $73 million worth of our stock. They also hold $35 million worth of Altria, $103 million of BAT, $35 million of Imperial Tobacco Group – that's a British company - $13 million of Japan Tobacco – that's for those of you who smoke Export A – and $7 million of Swedish Match – they produce and sell snuff.

So, the BCIMC invests your pension money in my company, and this investment makes money for you. You should know, though, that you don't get any money until I get my $30 million salary and bonuses. You and the other investors just get a share of what's left over. And, if you have a relative or close friend that's going to spend their rest of their life hooked up to an oxygen tank because they have emphysema, well, tell somebody who cares. I don't care, BCIMC doesn't care, Kevin Falcon doesn't care, and Christy Clark definitely doesn't care. 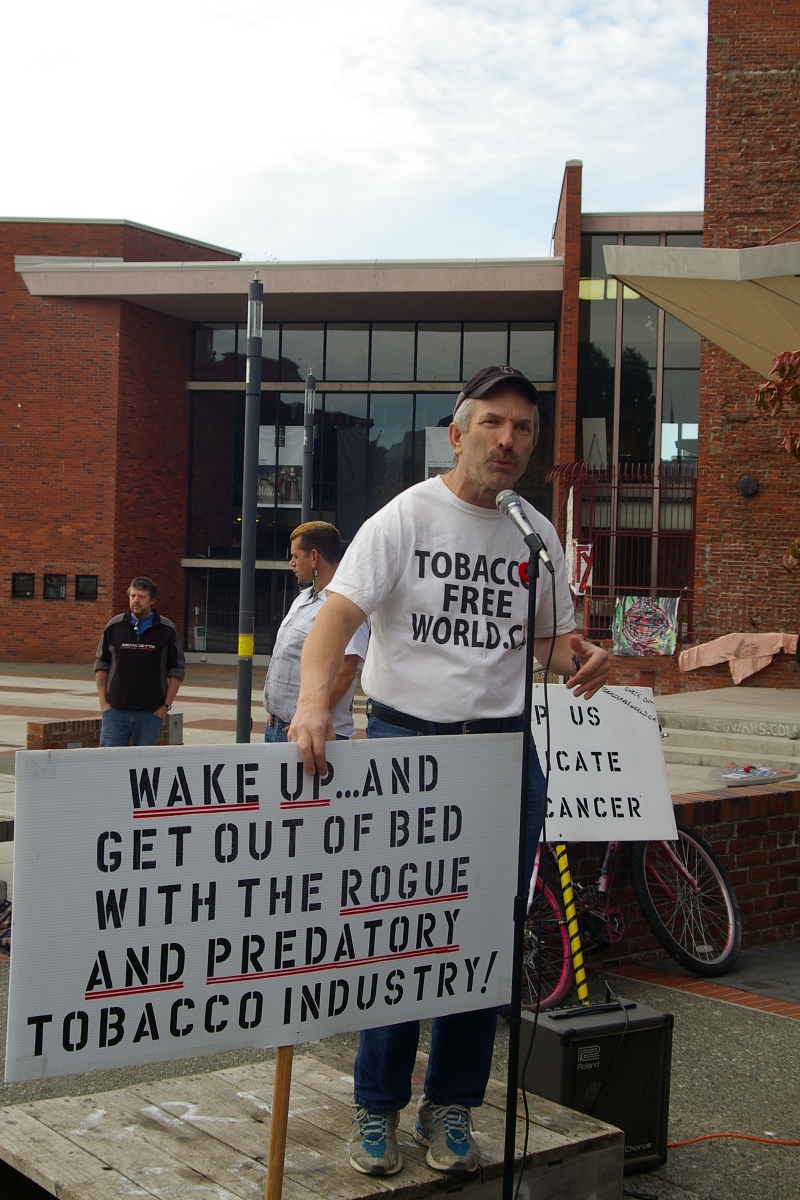 It does say on BCIMC's web site that “In considering good environmental and social responsibility practices, our Corporate Governance Principles and Proxy Voting Guidelines are supplemented by conventions such as the Organization for Economic Cooperation and Development (OECD) Guidelines for Multinational Enterprises, the fundamental standards of the International Labour Organization (ILO), and the United Nations Global Compact.” So, please don't tell them about those five-year-old children that harvest tobacco for us in Malawi. They certainly wouldn't be interested in the 25 cents an hour these kids get paid, or the nicotine poisoning these kids suffer from.

The proxy voting guidelines that BCIMC uses must be pretty good. I've got a racketeering conviction on my rap sheet, and the managers at BCIMC still voted to keep me on as a director.

The fact of the matter is, I love my job. I have a higher standard of living than a divine right monarch. And I don't lose any sleep at all over the five million premature deaths suffered by people who smoke. Why? Because I know that the top managers of Bank of America and Goldman Sachs – two other companies that BCIMC is invested in - will go to jail before I do.