Federal Minister of Health Leona Aglukkaq told reporters last week that the Federal government is "not in bed with big tobacco."

Now, why would anyone think such a thing?

Probably because Ms. Aglukkaq's ministry spent $3.6 million over the past six years on an effort to put larger (75% of the package area instead of 50%) and more graphic warnings on cigarette packages. Then, in late Spetember, 2010, Health Canada abruptly announced at a closed-door meeting that it was suspending the project.

No explanation was given at the time. There wasn't really any need for one. Health Canada had 53 meetings with lobbyists for Imperial Tobacco Canada, JTI-Macdonald Corp. and Rothmans, Benson & Hedges. They also met with lobbyists for the Canadian Chamber of Commerce 27times on this issue.

Perrin Beatty, a health minister in the Mulroney government, is President of the Canadian Chamber of Commerce and a lobbyist for that organization.

Ms. Aglukkaq said that Health Canada would concentrate their resources on contraband cigarettes, a move that the tobacco industry and one of their long-term proxies, convenience store owners, have lobbied for.

Airspace President Errol Povah successfully travelled on foot all the way from Victoria to New York City via Toronto, Ottawa, and Montreal. Read his story about the completion of the Journey here: I stepped into the Atlantic Ocean.

Graphic warning labels are a hot issue in the U.S. right now. Here's a good article by Richard Cohen of the Washington Post on the subject: The faces behind tobacco's deadly addiction. 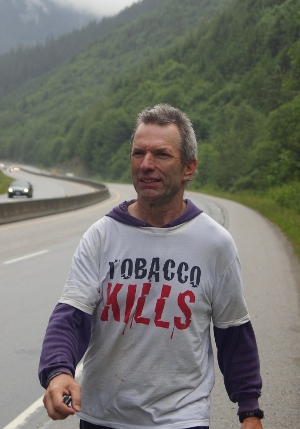 Blogger and former President of Airspace Smoking and Health met up with Errol on the Coquihalla Highway, 15 km. east of Hope. Here’s his story: Errol Povah’s Journey for a Tobacco-Free World.

It says that Errol will be in Merritt on June 11, and Kamloops on June 13.

There are a couple of other updates on the JTFW site, tobaccofreeworld.ca.

The JOURNEY for a TOBACCO-FREE WORLD

On May 31, 2010 - the World Health Organization's 23rd annual World No Tobacco Day - 30-year anti-tobacco activist Errol E. Povah and his Support Crew will embark on the world's first JOURNEY for a TOBACCO-FREE WORLD, a 6,300 kilometre "run, walk or crawl, from Victoria to Montreal." Time, energy and resources permitting, the Journey will then head south to New York City; those two destination cities being chosen specifically because they are home to the head offices of Canadian and American tobacco companies, where large anti-tobacco protests will be held to coincide with the JTFW's arrival. At the rate of 42 km per day, 6 days a week, the Journey is expected to take about 6 months.

The purpose of the JTFW: To raise awareness about largely-forgotten, replaced-by-obesity-etc. tobacco, the tobacco industry and the anti-tobacco movement, as well as to raise funds to 'ramp up' the War on Tobacco. Note: A total of 30% of the funds raised will be divided equally among BC Children's Hospital Foundation, Variety the Children's Charity and Toronto's SickKids Hospital Foundation.

"Globally, society is losing the war on tobacco, big time. Forty-six years after the first U.S. Surgeon-General's Report on the hazards of smoking, one would expect the death toll to be dropping, fast...and nearing zero. But tobacco continues to be the leading - and most easily and cheaply preventable -- cause of disease, disability and premature death in Western society," Povah said.

Read more: Press release for the start of the Journey for a Tobacco Free World

A video about Errol Povah's Journey for a Tobacco-Free World:

Excerpt: On the stand [historian Robert] Proctor began to explain racism in tobacco marketing. He started to say that the companies had marketed products called Nigger-Head Tobacco and Nigger-Hair Tobacco--brands that existed as late as the 1960s. But a Philip Morris attorney, objecting that Proctor had injected racial slurs into the courtroom, demanded a mistrial--and got it.

... and Barbara McDougall's bloody hand is on the flush handle!

Canadian PM can either stand by and do nothing OR he can throw us some life-jackets! So far, he's doing a great job of the former.

For the last 5 weeks, an ongoing drama has been unfolding around the world, with a focus on Africa...specifically, Senegal.

A 3-day meeting is scheduled to take place in the West African nation's capital, Dakar, starting on April 20, 2010. The two main participants:

The International Development Research Centre (IDRC), an international aid organization which describes itself, at www.idrc.ca , as "...a Canadian Crown corporation that works in close collaboration with researchers from the developing world in their search for the means to build HEALTHIER (emphasis ours), more equitable, and more prosperous societies"; and

Trips were being planned, flight tickets were purchased, hotel reservations were made; anti-tobacco activists from all over Africa and elsewhere were looking forward to fruitful, productive meetings, as well as a chance to 'see the sights' in and around Dakar.

Everything was fine, until a bombshell was revealed: On March 5, it was discovered that the Chairman of the Board of the IDRC is...wait for it, A TOBACCO EXECUTIVE!

Read more: Canada's title of 'World Leader in Tobacco Control' is in the toilet....

The following is my response to a National "we-[especially-Terrence-Corcoran]-would-never-accept-a-dime-from-the-tobacco-industry" Post article entitled, “Shaming smokers makes it harder to quit: study.”

In short, the smokescreen, pardon the pun... I mean, the article... is about a study/report by a group of UBC researchers. The very first sentence of the article sets the [bullshit] tone: “Years of anti-smoking laws and campaigns have amounted to a public shaming of smokers... ” (emphasis mine, throughout). And the crap continues...

One study subject whined, “You really are labeled as a bad person if you smoke.”

And Kirsten Bell, lead author of a paper just published on the issue, joined the chorus of whiners, claiming, “People are made to feel really, really bad about their smoking and are treated quite badly...”! In her very next breath, however, Bell provides a very small glimmer of truth when she says, “They [smokers] feel really negatively about themselves...”

Bell goes on to suggest that there is some sort of a contrast between “how smokers are treated and the NON-JUDGMENTAL, ‘harm-reduction’ approach now widely applied by public health to people with other addictions.”…the clear -- and FALSE -- implication being that we (anti-tobacco activists) and/or “public health” people are ‘judgmental’ toward smokers.

My point, as alluded to by Gar Mahood (Non-Smokers’ Rights Association, Toronto): Whether it be the ‘OPINIONS’ of smokers themselves, their drug [nicotine] dealers (the pushers in pinstripes at the tobacco industry) or any of the industry’s well-paid (albeit with blood-stained money) puppets, ‘the tobacco-control movement has NOT tried to stigmatize smokers, individually or collectively.’

As smoking bans continue to expand, many smokers (and even some non-smoking ‘sympathizers’) – especially those who belong to so-called “smokers’ rights” groups – have developed a major “Woe is me!” (or, “Woe are we!”) mentality. They are whiners who want all of the “freedoms”, “choices” and “rights” that were once thought to be part of the smoking ritual, but none of the responsibilities that normally go along with all such freedoms/choices/rights. NONE WHATSOEVER!

Support Errol Povah in his Journey for a Tobacco Free World: http://tobaccofreeworld.ca/

I would also suggest that many smokers have a serious love/hate relationship with smoking, cigarettes (often thought of as their ‘best friends’... always there for them, through good times and bad, blah, blah, blah) and, ultimately, themselves! Deep down inside, many of them desperately want to quit, but won’t/can’t…for one valid -- or, most likely, INVALID -- reason or another.

Bottom line: No legitimate anti-tobacco activist that I know – and I know many of them, from all over the world – is the least bit interested in the “public shaming” of smokers…or has ever ‘labeled’ any smoker as a “bad person.” Nor has anyone I know ever “treated [any smoker] quite badly” or in a ‘judgmental’ way…unless, for some warped reason, you somehow consider reasonable and ever-expanding smoking bans to be part of treating smokers badly.

For almost a year and a half (Aug, 2008 to Jan, 2010), Airspace Action on Smoking and Health conducted a poll on its website: “Do you support Airspace’s call for the total eradication of the tobacco industry from the face of the planet?”

Of the two possible responses (YES or NO) – and with all due respect (and thanks!) to the 76 people who voted “YES” – Airspace President Errol E. Povah wasn’t terribly interested in ‘the reasons’ for the YES votes. Why? Because those ‘reasons’ most likely would have been something like, “It’s the ‘decent’/’common sense’/’right’ thing to do... and it’s long overdue!” Or the comments probably would have, in one way or another, reflected the statement on which our call -- for the total eradication of the tobacco industry from the face of the planet – was and is based: Given what is now known about both tobacco and the tobacco industry, there is no justification whatsoever for any civilized nation fo the world to allow that industry to continue to exist or operate within its borders.

However, Povah was – and still is – extremely interested in hearing ‘reasons’ from those 105 people who oppose the eradication idea.

Frankly, the only people we can think of who might oppo$e the idea are tobacco executive$ and the $mall army of well-paid puppet$ (including $ome of the be$t politician$ and lawyer$ money can buy [former Prime Mini$ter Paul Martin being one of the be$t example$]) the tobacco indu$try own$. The rea$on$ for their oppo$ition $hould be very obviou$!

This invitation is open indefinitely... to those 105 poll responders and anyone else.

To be clear: It’s a free country! It would be naive in the extreme for us to think that everyone should agree with us! You have every right to disagree with us... and to oppose our call for the total eradication of the tobacco industry from the face of the planet. But please, have the courage to tell us, in your own words, exactly why you oppose the idea. While you’re at it, perhaps you could tell us something good about either tobacco or the tobacco industry.