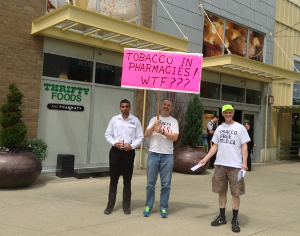 Airspace used the occasion of World No Tobacco Day, May 31, to push back against the "Tobacco Six": the British Columbia grocery and drug store chains that oppose the end of tobacco sales in pharmacies. British Columbia is the only Canadian province that still permits pharmacies to sell cigarettes and other tobacco products.

The plan was to spend about 45 minutes picketing each of the three grocery stores that represent half of the TOBACCO SIX:  Thrifty Foods, Save-On-Foods (part of Darrell Jones' Overwaitea Food Group) and Safeway.  There aren't a lot of Thrifty options, but we chose the one in South Surrey, in a mall called Morgan Crossing.  While I carried a large placard that said "TOBACCO IN PHARMACIES!  WTF???" on one side...and "JIM DORES, GENERAL MANAGER, THRIFTY FOODS IS A BULLY!" on the other, Marc and Dave handed out leaflets that explain exactly why we were picketing these stores (check out several stories about the issue of tobacco in pharmacies, including a Global TV BC report on this site.  While we always encounter a few ignorant people (who refuse to take our literature and learn about the issue... and say things like, "Get a job!", "Get a life!", etc.), the vast majority -- yes, even including several smokers -- were very receptive... and happy to chat with us, tell us their personal experiences with tobacco, thank us for what we're doing, wish us luck, etc.

That said, the reactions of employees/managers/security of our target stores are always so funny!  Obviously, no business wants to have protesters in front of it.  But some of the things they say to us... and some of the lame arguments they put up are absolutely hilarious.

My knowledge of the process by which dozens, perhaps hundreds of government bills make their way through the Canadian House of Commons and/or the Senate each and every year is limited to not much more than this:  I know that the bill numbers are 'recycled'.  They have to be, otherwise it would become way too cumbersome.

When I first heard about Bill C-51 -- the current, extremely controversial (and, dare I say, anti-democratic) anti-terrorism bill -- I thought, "Hmmm, Bill C-51.  That rings a bell."  Vaguely recalling that it had something to do with tobacco, I googled "Bill C-51 tobacco"... and, sure enough, up popped a few links -- from 1988 -- to Bill C-51, which later became the Tobacco Products Control Act.

What a coincidence that, 27 years later, a so-called "anti-terrorism" bill would bear the same number.

More than a quarter of a century ago, anti-tobacco activists across the country, including Airspace, celebrated the enactment of the TPCA.  Sadly, the party was short-lived, as (probably intentionally-created) loopholes -- big enough to drive tractor-trailers loaded with contraband cigarettes through -- were soon discovered.

This letter was published in The Tri-Cities Now on November 6, 2014:

The first line of "Plan to ban cigarette sales opposed" (Oct 21 Now) said, "You could call Bev Harris a rebel."

As a twenty-year friend and colleague of Bev's, I know she's a rebel...and, when it comes to causes, few, if any, are bigger and better than the one we -- and many others -- have chosen to tackle.

Everybody's talking about the ebola crisis.  Well, with all due respect to everyone who has been impacted by Ebola:  I don't recall when we first started hearing about it this time around, but a very conservative estimate would be one month ago.  Globally, about 5,000 people have died from Ebola.  In that same month, 100 times as many people -- yes, about 500,000 people, globally -- have died from tobacco use (about 10% of that toll being non-smokers, killed by second-hand tobacco smoke).  While ebola may have a small potential to change human history, tobacco has already done so.

A couple of other interesting comparisons:  Africa (where Ebola originated) is also a primary target of Big Tobacco, complete with virtually unfettered marketing and advertising to kids of all ages...and, while those fighting to contain/eradicate Ebola are hailed as heroes (as they should be), those of us fighting Big Tobacco are often, at best, ignored; at worst, vilified.

Read more: Letter to the Editor about cigarettes in pharmacies

A letter sent from the Health Officers Council of BC to individual board members of the College of Pharmacists: Click here to read the PDF.

Excerpts: "The sale of tobacco in pharmacies is now recognized as an unacceptable ethical and professional contradiction."

"Many institutions within British Columbia have advocated for the elimination of pharmacy tobacco sales, including the Canadian Cancer Society, the BC Lung Association, Heart and Stroke Foundation of BC and Yukon, and the Health Officers Council of BC. Regulation is overdue and we hope that you will continue to proceed down this path even in the presence of open hostility and opposition from pharmacy (tobacco) retailers and their threats of litigation."

How can one province simultaneously be #1 and #13 in terms of tobacco control?  Well, you'd have to ask Christy Clark... and/or her illustrious Health Minister, Terry Lake.

Regarding two very important aspects of Tobacco Control, among the 13 provinces and territories of Canada:

On the business side, representatives of six retailers operating in BC have taken it upon themselves to bully individual members of the British Columbia College of Pharmacists with threats of personal lawsuits should they vote to remove tobacco products from pharmacies in BC. The letter correctly notes that the College does not have the power to order removal of tobacco products from separate retail space. However, it does have the power to withhold pharmaceutical licenses from establishments that provide health services while simultaneously selling the leading cause of preventable disease and premature death. These retailers appear to wish to profit from both and seem willing to use corporate bullying tactics to discourage College Board members from doing their duty.

Airspace believes that corporate threats and bullying of individuals charged with protecting public health ethics is unacceptable. If you agree, please, consider sending a message by doing your grocery and prescription/over-the-counter drug shopping elsewhere. Even more importantly, please write the corporate headquarters of these bullies and advise them that you will not shop at that store again until they remove all tobacco products and stop harassing those whose job it is to regulate the ethics of health care services and providers.

Although it is difficult to find grocery stores that do not sell tobacco products, others do not simultaneously attempt to masquerade as health care providers or threaten individual board members of organizations in charge of protecting public health ethics with lawsuits for doing their jobs.

For now, we ask that you please support our position that there is no place for tobacco in a business in which a pharmacy operates.

The letter was also signed by the CEO's of Rexall, Thrifty Foods, Overwaitea and the Medicine Shoppe. The article points out that BC is the only province that allows tobacco to be sold in stores containing pharmacies.

A story by transplanted Canadian Samantha Bee about child labour on The Daily Show:

Almost 5 months after the 50th Anniversary of the first U.S. Surgeon-General's Report on the Hazards of Smoking, Airspace Action on Smoking and Health -- the world's leading all volunteer anti-tobacco organization -- is marking the World Health Organization's 26th annual World No Tobacco Day (May 31, 2014) by once again renewing our call for the total eradication of the tobacco industry (yes, both the legal and illegal components) from the face of the planet.

Themes for WNTDs have covered a wide range of very worthwhile ideas and initiatives over the past 26 years, including:

Many other themes use the words "without tobacco", clearly implying tobacco free as well.

As wonderful as all of those objectives are -- tobacco free public places, transport, workplaces, sport, art, film, fashion, youth, etc. -- a tobacco free world is the 'umbrella' that covers all of those things and, clearly, much more.