Excerpt: "The no-smoking bandwagon is rolling toward Squamish, with civic staff told to investigate the feasibility of prohibiting smokers from lighting up at home if children are present.

"The consideration is part of an overall no-smoking motion -- suggested by Coun. Raj Kahlon last December -- that also includes banning smokers from lighting up in vehicles where children are present and in public places such as bus shelters."

Excerpt: "The B.C. Human Rights Tribunal has agreed to hear the case of a woman who claims she has been the victim of discrimination because housing authorities wouldn't provide her with smoke-free public housing.

"Sheila Abraham is on a disability pension for a number of conditions and has been diagnosed with hyper-reactive airway disease, which is caused and exacerbated by second-hand smoke, according to a complaint filed with the tribunal."

Here is an English translation of an article by Guillaume Bourgault-Côté that appeared in Le Devoir, Montréal's major French-language newspaper: 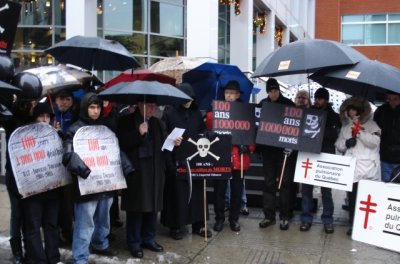 The 100th anniversary festivities for Imperial Tobacco turned sour yesterday. The company cancelled its public event, the government disassociated itself from the event, and it was ultimately a demonstration by anti-tobacco groups that marked the centenary.

On Thursday, the St. Henri-based enterprise announced in a press release that Marguerite Blais, Minister for Seniors and Member of the National Assembly for Saint-Henri-Sainte-Anne would attend the next day to take part in the unveiling of an ice sculpture to mark the 100 years of the company. None of that took place.

First, Mme. Blais cancelled her participation, then the weather conditions forced cancellation of the unveiling of the sculpture. (It was 2 degrees Celsius and raining yesterday afternoon in Montreal.)

According to Imperial Tobacco, a scheduling conflict forced Mme. Blais to cancel. However, at the minister's office, Le Devoir was told it was a question of principle and good judgment that dictated the decision.

Even if she could have attended, Mme. Blais would not have taken part in the ceremony, her press attaché, Christiane Chaillé, explained. "Mme. Blais supports all the government's positions with respect to tobacco control," said Mme. Chaillé.

It appears it was the riding office of Mme. Blais that accepted the invitation without informing the cabinet office. The latter gave assurances that it would never have agreed to having the Minister for Seniors take part in a celebration organized by a leading tobacco products company.

The Quebec Coalition for Tobacco Control (CQCT) figures that the minister would have been playing with fire in showing up for the event. "It would have been a completely contradictory message," argued Louis Gauvin, spokesman for the group.

The coalition organized a demonstration yesterday in front of the head office of Imperial Tobacco, accompanied by Physicians for a Smoke-Free Canada. "We find it revolting that a tobacco company celebrates its anniversary with balloons and cheers," said M. Gauvin. 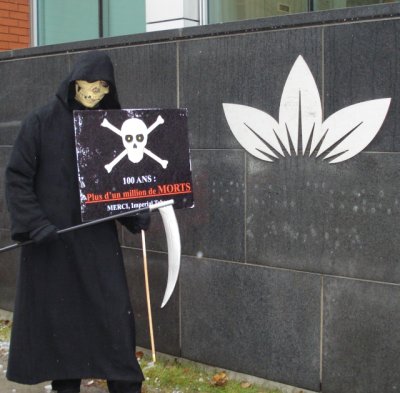 "For us, the only real contribution by Imperial Tobacco is the hundreds of thousands of deaths in Canada in the last 100 years, the illness, the suffering, the deceit, the hiding of information. They've done everything in their power to maintain the privilege of marketing an essentially deadly product. There's nothing to celebrate here."

Imperial Tobacco has been located in the South-West of Montreal since its beginnings. The headquarters have been located next to the factory site for the past five years. In a press release sent out yesterday, the company justified its decision to celebrate its centenary in public due its respect for "the most rigorous norms of social responsibility" and the role it has played over the years in "the evolution of the artistic, cultural and sporting heritage, fashion and community services."

Since 2000, the company has belonged to British American Tobacco (BAT). 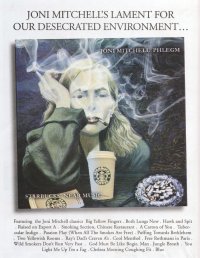 This time, it's from George Jonas instead of Terence Corcoran. Here's a response:

With the publication of If you won't shoot, don't Taser by George Jonas (Nov. 24), the public discussion of the relationship of tobacco with death and disease has gone full circle.

People in Denial about this relationship have put considerable energy in identifying alternative causes for the many illnesses caused by tobacco; chlorine in swimming pools, x-rays, increased radiation in the environment, even n "bad karma'. To relate just one of many cases I am familiar with, Californian Mary Herrin chose to identify her doctor as the cause of her two heart attacks, instead of her cigarette habit; Ms. Herrin died at the age of 58.

What Mr. Jonas has now given us, based on what he calls his own "mini-inquiry", is that the death of Robert Dziekanski at the Vancouver airport was caused by Dziekanski's cigarette habit, not by over-eager use of tasers by the police. Jonas, however, was not willing to blame Dziekanski for his own addiction to cigarettes. Nor was he willing to blame the manufacturers of the cigarettes Dziekanski consumed, even though those manufacturers lied to the public for many years about the adverse effects of their products, including the addictive nature of them.

This is silly nonsense. No 'nanny", big or small, deprived Dziekanski of the ability to communicate in either of Canada's official languages. No nanny separated him from the relatives he was supposed to meet at the airport. No nanny caused him to "create a disturbance", attracting the attention of the police. No nanny caused the police to over-react.

George Jonas may well be looking for a big nanny to change his diapers for him. Good luck with finding a volunteer.

Canadian Prime Minister Stephen Harper announced on Nov. 1 that former RCMP Commissioner Norman Inkster has been appointed Chair of the Advisory Council on National Security. Inkster has been a member of this Council since it was established in 2005.

The remaining tobacco industry executives living in Canada will probably be sleeping better at night knowing that Inkster is looking out for them. The same is true for the members of the tobacco-industry-funded Canadian Convenience Stores Association. After all, how would Canadian convenience stores survive if they didn't have cigarettes to sell?

Those of us who are not tobacco industry executives or convenience store owners should start figuring out how to bring our own bomb-sniffing dogs to the airport with us. Inkster has a history of providing cover for the People in Charge that goes back to the Mulroney government, when he decided not to execute search warrants against Tory backbench MP Richard Grise during the 1988 election campaign.

Here's a worthwhile article by Bryan Farrell in In These Times: Tobacco Stains: The global footprint of a deadly crop. This article was also published on Alternet.

Excerpt: "The looting of natural resources, the destruction of ecosystems, and the poisoning and enslavement of people are all reasons to end our dependence on a product that is completely unnecessary to humans."

You're a cop in Southern California right now, at the height of "Firestorm 2007." Half a million people have been evacuated and hundreds of homes have been destroyed -- and many more are threatened -- by the still-mostly-out-of-control wildfires, fanned by winds up to 100 kph. One dead, many injured so far.

You're about 30 km from the nearest fire, just patrolling on the outskirts of your quiet and relatively small town (which is not in any immediate danger from the fires), trying to live life and do your job as normally as possible when, all of a sudden, you notice the driver of the car in front of you toss a still-smoldering cigarette butt out of his car window.

After somehow ensuring that the hazard has been eliminated (tinder-dry bushes and trees line both sides of the street...and there are high winds), what do you do? After all, you've heard that cigarettes are the suspected/known cause of some of the fires but...

Do you ignore it (wouldn't want to be accused of over-reacting, making a mountain out of a mole hill, etc.)... pretend you didn't see it and just carry on, like nothing happened? Who would ever know?

Read more: What would you do?

The media tends to under-report stories about fires started by cigarette smoking, but somebody forgot to tell the Edmonton Sun. They ran a story on October 4, 2007 with the title Smoke leads to fire.

The case of Philippa Byfield is the most recent of the six fires documented here. She was a 51-year-old terminal cancer patient, and hastened her death by attempting to light a cigarette while connected to an oxygen machine. In the process, she burned down a $1.5 million home belonging to her father, Ted Byfield.

Ted Byfield and Link Byfield (Philippa's brother) were the publishers of Alberta Report and a sister publication, BC Report. Their publishing operation went defunct in 2003. During the period when Vancouver and Burnaby adopted no-smoking bylaws, and the WCB attempted to restrict smoking in workplaces throughout BC, the Byfields, along with writer Derek DeCloet, consistently followed the tobacco industry party line on smoking. Among other things, they ran headlines claiming that restrictions on second-hand smoke were based on "faulty science" (Nov. 10, 1997). Some more random examples:

"If the WHO has its way (by reducing exposure to second-hand smoke), however, Mexico and other developing countries will soon become less civilized." (Feb. 22, 1999)

The Edmonton Sun article says that Link Byfield declined comment on the cause of the fire. That's unfortunate; I would like to hear his and Ted's opinion on whether Philippa's smoking habit was worth it.

Delta's (self-confessed smoker) Joann Hamelin had a letter published in the Friday, Sept. 14 Vancouver Sun entitled, "There are worse habits than smoking.", regarding Vancouver's plan to ban smoking on patios, 6 meters from entranceways, etc.

According to Hamelin, vehicle emissions and obesity are "worse" (she conveniently neglects to provide any facts/statistics to back up her claim)...and all of us "anti-smoking activists" are hypocrites.

Read more: A bunch of hypocrites?