The Conservative Party of Canada is telling us that crime is something we should be concerned about. They want to increase mandatory sentences (especially for drug-related offenses), limit pardons, and, presumably, build more prisons.

There was also a press release from the Fraser Institute, dutifully reproduced by the Toronto Sun, telling us that tobacco smuggling is a problem, and the way to solve this problem is to reduce taxes on cigarettes.

Now, here's a couple of news stories that the Canadian media is not telling us about:

Excerpt: "Tobacco industry bids to undermine tobacco prevention and control measures by mounting legal challenges based on international trade treaties appear to have become all the rage, to the dismay of public health advocates. Australia, Norway and Uruguay now face such trade-related lawsuits. Two similar suits against Thailand and the United States were recently settled in the industry’s favour. And as [Dr. Margaret] Chan indicated, legal skirmishing underway at the World Trade Organization suggests that many more countries will soon join the list of industry targets."

To hear their proponents tell the tale, you could be excused for believing that e-cigarettes are the health equivalent of the Second Coming.

The most harmful part of smoking is the smoke, which e-cigarettes eliminate while keeping the experience of smoking. Physically resembling cigarettes, they are actually electronic devices containing a cartridge of liquid nicotine solution that is heated and vaporized for inhalation.

For addicted smokers, e-cigarettes are a kinder, gentler way to needlessly empty their wallets into a wealthy corporation’s bank account in order to gratify an artificially manufactured craving for a toxic non-essential.

But e-cigarette proponents resolutely refuse to address the two major flaws in their argument.

Backwards burden of proof. They believe that e-cigarette use or “vaping” should be permitted everywhere that smoking is not. Then, if in 50 or 60 years we find out that, like secondhand smoke, e-cigarette vapour harms bystanders, we can spend another 30 to 50 years fighting to outlaw their use in public. They describe anyone who objects to being volunteered as a lab rat to protect their comfort and convenience as a heartless zealot at best and genocidal maniac at worst.

Irrelevant safety standard. Few doubt that inhaling e-cigarette vapor is safer than smoking. Or for that matter, leaping in front of an oncoming train. Or gargling drain cleaner. If we used smoking as a benchmark against which to measure acceptable safety standards for everything, there would not be much left in the world to describe as harmful.

Read more: E-cigarettes: safer than what?

Add Tanzania to the list of countries where child labour is used in the harvesting of tobacco. Article by Ludovick Kazoka in Tanzania Daily News: Combating child labour in tobacco areas

Excerpt: "These children work long hours without rest or food, endure extreme weather without appropriate gear, carry heavy loads that can affect their growth, face exposure to harmful agrochemicals, and do not have time to go school. On average, they work 8 to 12 hours per day."

Airspace President Errol Povah and Philip Morris International CEO Lou Camilleri made a trip to Victoria on November 10 to participate in Occupy Victoria and draw attention to the British Columbia Investment  Management Corporation's continued investment in the tobacco industry. They walked from the Occupation at Centennial Park to the BCIMC offices. A transcript of Camilleri's speech appears below the fold.

It says in BCIMC's website that "bcIMC is accountable for the corporate governance and environmental and social responsibility activities that we undertake on behalf of our clients." Accountable to whom? In 2008, when Minister of Finance Carole Taylor was questioned about the wisdom of investing BC pension funds in tobacco company, her response was that BCIMC's directors are prohibited from taking direction from government.

In addition to investing in tobacco companies, BCIMC's managers also vote proxies when the annual meetings of those companies come around. They have used these votes to vote against shareholder efforts to require the companies to adopt higher standards of social responsibility. They voted for a resolution that would permit Imperial Tobacco to make donations to political parties. They voted for management-approved candidates for directors, several of whom were involved with Altria and Philip Morris International during the period that these companies were involved in racketeering.

Altria also gave money to candidates in 45 US states (including current presidential candidate Rick Perry), and Philip Morris International gave money to the Ontario Progressive Conservative Party. Is it appropriate for the Government of British Columbia to be a party to this? 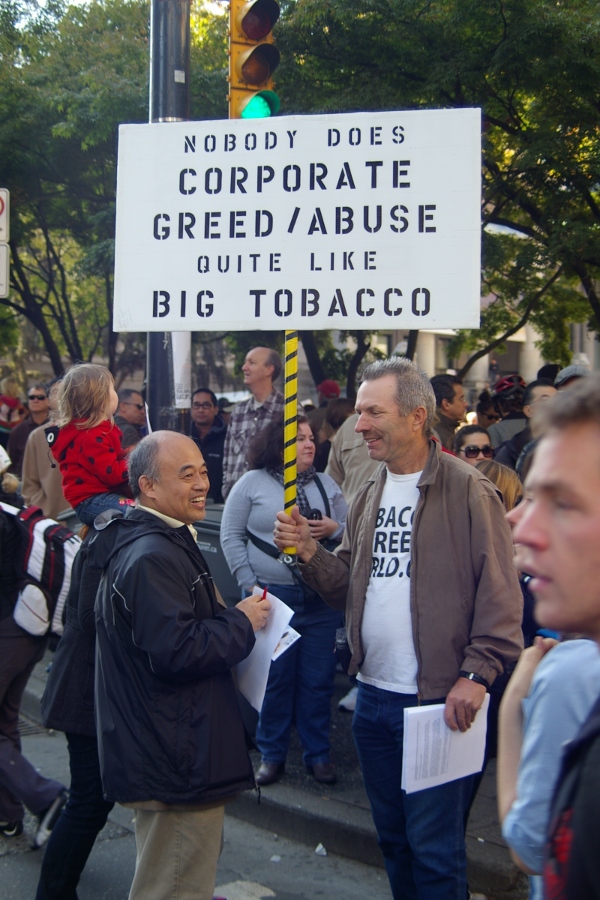 Airspace President Errol Povah showed up at Occupy Vancouver on Oct. 15. He recorded a podcast about it. (Look below picture.)

Excerpt: "The report [by Oxfam and Farm Labor Organizing  Committee], 'A State of Fear,' shows that one in four tobacco farm workers  is paid less than the federal minimum wage. Many suffer from nicotine  poisoning after absorbing nicotine through their bare skin." Link to Oxfam report

An excellent comment: "I'll bet those workers only have  $400,000 after feeding their families and paying all their expenses, too.  What kind of life is that?"